You have to ask the question why Halloween has become another “celebration” on the ‘party’ calendar. When I was a kid it was simply a “penny for the guy” – also known as ‘legalized begging’ in the UK. Kids back then would sit with an effigy of a 1600’s English Catholic terrorist called Guy Fawkes (now turned into the face of defiance by the movie V for Vendetta), asking for a penny to put our ‘guy’ to a fiery end on Bonfire Night, but at least our little voodoo ‘guys’ looked harmless. Mind you, ‘trick or treat’ is now practically legitimate begging too in many towns across the UK. This blog is in two parts, as I want to cover in some depth the symbolism and imagery associated with the constellation of Orion.

I personally used to like the idea of ‘mischievous night’, where did that go? Of course the burning of Guy Fawkes along with the ‘Burning Man’ festivals in the USA are links to the ancient Pagan (Wicker) and too often satanic ceremonies that have literally involved burning people alive over the Centuries. Fire was a ‘tool’ of the Christian Inquisition the world over, and so ‘burning alive’ a victim was considered an offering to ‘other worldly’ entities. The Roman Catholic obsession with ‘burning alive’ anyone who did not accept their ‘deity’ was designed to align this horror with ‘unseen’ forces. The burning of approximately 220 Cathars (en masse) in a bonfire at the foot of the Chateau Montsegur in southern France (in 1244), was only one example of the ‘acts of evil’ performed by the Catholic mindset.

Halloween has also become a ‘pantomime’ in the UK and USA. Its place in the calendar is up there with the ‘Disney land proportions of sway over the populace’. From the original Pagan traditions, to the now ‘trick or treat’, ‘sleazy zombie’ meets ‘Chucky’ for a ‘piss up’, Halloween in its modern form, has moved on into lunacy; but its reason for existing en mass in its modern form has more to do with ‘dark’ connections to Satanism as we enter the ‘darker days’ of Autumn. Dressing up as zombies, witches, devils, (innocently), all energetically mirror forces that ‘want horror’ in all its forms. Whether effigies of a bloke nailed to a cross or a lit pumpkin (once a skull), both energetically come from the same focus on ‘death’. Many artists that belonged to various ‘Brotherhoods’ or ‘inner circles across Europe’, from the Renaissance onwards, knew the true meaning behind the ‘cult of the dead’. The imagery associated with the skull and the more ‘cannibalistic rituals’ of  ‘elite priests in ancient times’ can be seen as an archetype in numerous art, too many to go into in this particular blog. The two most popular festivals, besides Christmas in the ‘Catholic’ calendar, are, Halloween and Easter. Both are celebrations of death on the surface, but for elite satanic networks these points on the calendar are used to futher distort reality.

I am not saying that harmless fun, a laugh or dressing up with your mates alludes to the above, of course not. In most cases our unique vibe (energy) is often more powerful than the collective hive-mind. It’s what lurks in the shadows, behind the scenes that likes our ‘energetic attention’, especially at thes important points on the original Pagan calendar/time wheel.

Lady Gaga (above right) often seemed to be permanently celebrating Halloween at one time? But it is not Halloween in truth? It’s the portal point into the ‘underworld’, the ‘shadow world’ of ‘Orion and Saturn worship’ through the venartion of the cult of the dead. Halloween is a major point on ‘Hecate’s ‘Wheel of Time’ and Hecate or Kali (the Dark Goddess) focuses our attention at this ‘dark time’. She was also known as Arianrhod, Catherine and Persephone in other versions of these beliefs and myths. The winter festival of Lenaea (the ‘wild hunts’) in ancient Greece was also akin to the celebration of ‘dark forces’ that would run amok from their point of entry into our world at Samhain (Halloween) through to Saturnalia (see below). The Hunter will become a significant symbol in this blog, as it is Orion who leads the hunt. From the ‘Death Eaters’ in the ‘Harry Potter‘ movies, to Madonna using the ‘Horned El/Molech god’ (more on that in part 2) at the super bowl several years ago. All are ‘symbols’ of the darker forces that form a vibrational pact, connecting us to the ‘shadow’ worlds hidden, some say, in the Orion Constellation. 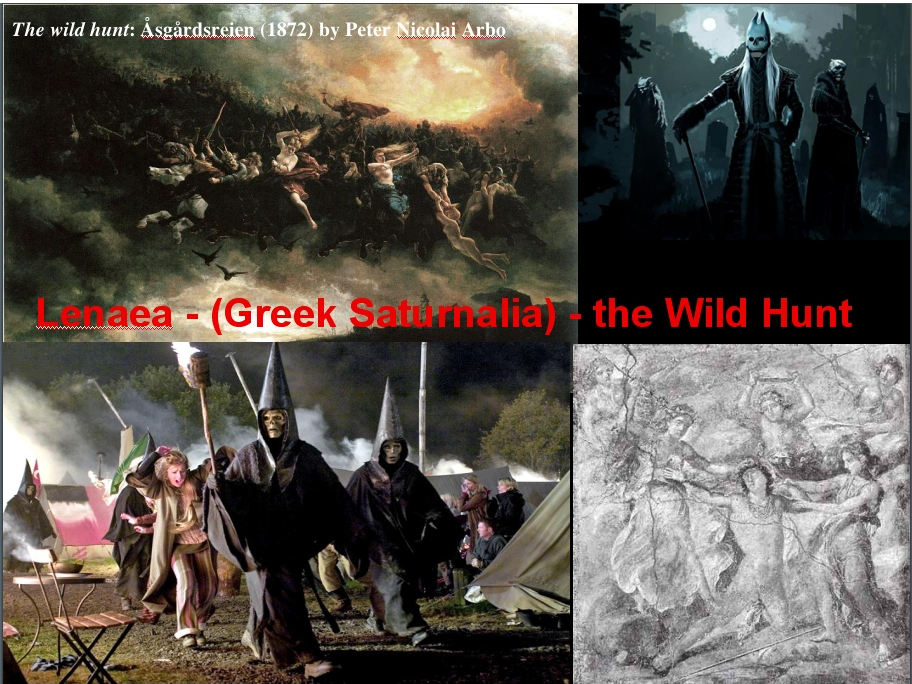 The Death of a ‘god’, the death of a year, the death ‘in nature’ (all producing the darker days and in general), leads to the ‘dark mass’ from ‘All Hallows Eve’ through to Saturnalia. For the elite (and for those that have a vested interest in keeping the masses focused on a lower vibration), Halloween has become a focus for Satanists. Just as Saturnalia (Christmas) is another reinforced energy theft, from ‘endless shopping’ to the religious symbolism’; it too is enhanced to steal energy by those that control the flow of money and wealth. See my blog on Christmas here. All this imagery serves as a ‘channel’ for forces that feed off our mental energy and our collective ‘focus’ at these points of the year.

In Biblical traditions, John the Baptist was said to be born six months before Jesus Christ, both astrologically marking opposites ends of the Milky Way. Like the Ancient Celtic counterparts, the Oak and ‘Holly Kings’, ‘John and Jesus’ are said to be ‘solar deities’ whose coronations coincide with the solstices. Son of Atum, (Man) Adam, Osiris (the Green Man) are all connected to Orion and ‘the lord of time’ who governs the Soltices and equinoxes. See my book Through Anceint Eyes for more information. 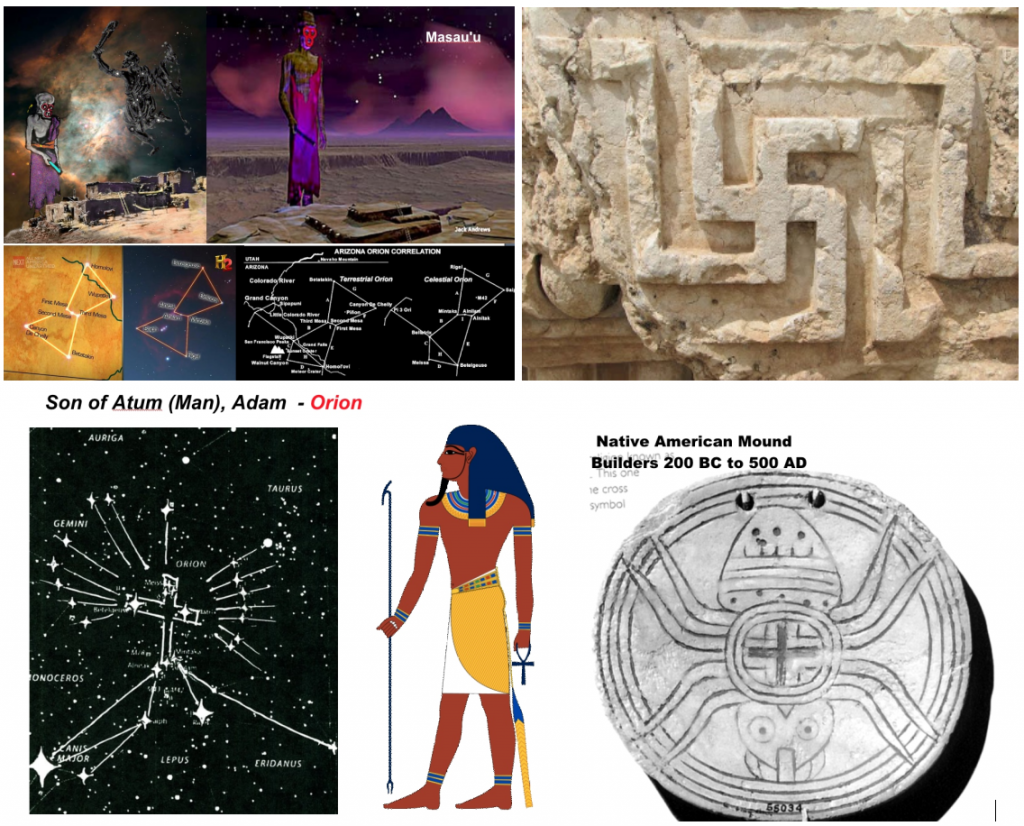 Note also the swastikas on the Halloween costume (below left) they are symbols of the opposing forces born of Orion’s dulaity projected on the mind of those on Earth. Just as the Swastika formation is a representation of the swirling galactic forces of Orion. The photo here shows the original version of the solar forces. On the Indian coin below stands Orion with a swastika between his feet and the ‘OM symbol’ has also been connected to the solar trinity focused on Orion (bottom image from Italy). 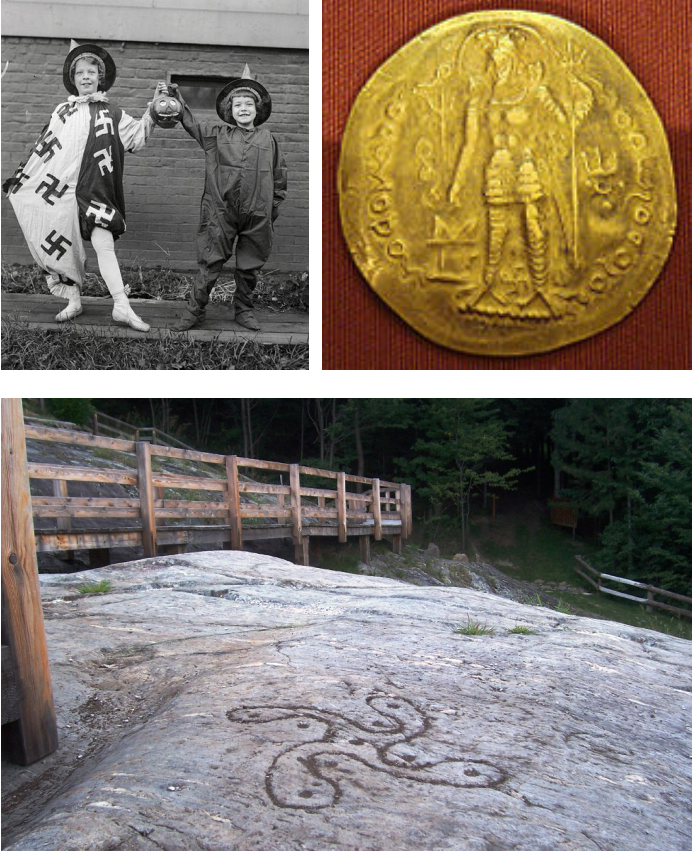 Whether pagan or Christian, these twin male (Jesus/John) force reigns over the solstices in a perpetual cycle of life, death and rebirth. John of course loses his head symbolically (the pumpkin) and as with the leader of the ‘Sun and Fire’ clans of the Hopi, Pahana, also has his head removed on their ancient tablets. The Hopi chief deity Masauwu (see below) carries a head and a sack of seeds (stars) and Masauwu is often wearing a pumpkin like mask or head. Note the Sun wheel in the petroglyph below and the flute player. These two symbols relate to ‘life’ and are opposing Masauwa as a symbol of ‘death’. Both petroglyphs are symbolic of the time of death (from All Hallow’s Eve through to Saturnalia, when the Sun ‘symbolically dies’ and Masauwu (Orion) can be seen in the skies from Earth’s northern hemisphere. Petroglyphs like these were ‘calendar markers’ for the Hopi in the Bronze Age period. The Egyptians, Mayans also fixed their pyramids on Orion. See Part Two.

The feast of ‘All Hallows Eve’, on its current date in the Western calendar, may be traced to Pope Gregory III’s (731–741) founding of an oratory in St Peter’s for the relics “of the holy apostles and of ‘all saints’, martyrs and confessors”, those that were often ‘burned’ at the stake. In 835, All Hallows’ Day was officially switched to 1 November, the same date as the Pagan date of Samhain, at the behest of Pope Gregory IV. Of course, Samhain also Anglicized as Sawin, Sowin, in the ancient world marked the end of the ‘harvest season’ and the beginning of winter or the ‘darker half’ of the year. In some places, torches lit from the bonfire were carried sunwise around homes and fields to protect people at this ‘time’ of year and many indigenous peoples used ‘sacred fire’ as a marker of the beginning of the new Sun as Winter approached. It is suggested that the fires were a kind of imitative or sympathetic magic – they mimicked the Sun, the stars, helping the ‘powers of growth’ and holding back the decay and darkness of the coming winter. Bonfires were also said to keep ‘away the devil’. On a physical level this is true, but on the ‘unseen’ levels, there are forces that ‘love fire’. The salamander symbol is one example of this reversal of fire and its usefulness to those unseen forces. The Roman Catholic King, Francis I of France (a prodigious patron of the arts who initiated the French Renaissance by attracting many Italian artists to work on the Château de Chambord including Leonardo da Vinci), used the fire lizard (salamander) as his emblem (below).

The ‘dark’ half is exactly what we are looking at with Halloween and the days leading up to it. It is why its symbols relate to the ‘cult of the dead’ and its opposite ‘the god of Life’ (from the light half to the dark half of the year). The imagery associated with the skull (including the Halloween pumpkin-head) is another symbol for the death cults that are still using archetypal imagery found in many festivals, music, symbols and of course in movies to this day. Christmas, or Saturnalia, was the final doorway through to the ‘new sun’ (New Year) and in some of the Scandinavian lores and legends, ‘Krampus‘  (the horned keeper) accompanies Father Christmas. He’s the symbolic repesrentation of the devilish horned clan I look at in part two.

The Tibetans and the Hopi are said to be the same ‘first peoples’ and both cultures have ceremonies that imitate the two horned deities. 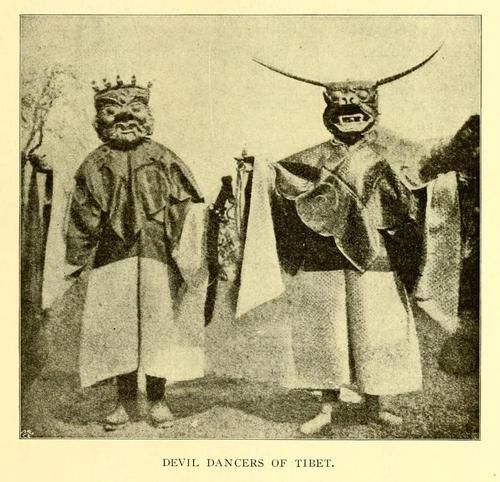 The ‘two horns’ and the colour symbolism associated with ‘red and blue’ are also connected to the ‘death cults’, trickster gods (Mercury, Hermes and the snake) and all these archetypes fit like ‘cogs in a unseen clock’ working the ‘cycles’ of duality in our minds.

The constellation of Orion also rises in the Northern Hemisphere in the autumn, so to usher in the darker days of year. Orion as we shall see, is a star system that is highly relevant to this ‘opening of time’ as we pass through into period called Saturnalia – Winter and Yule. It all starts with ‘All Hallows Eve’. 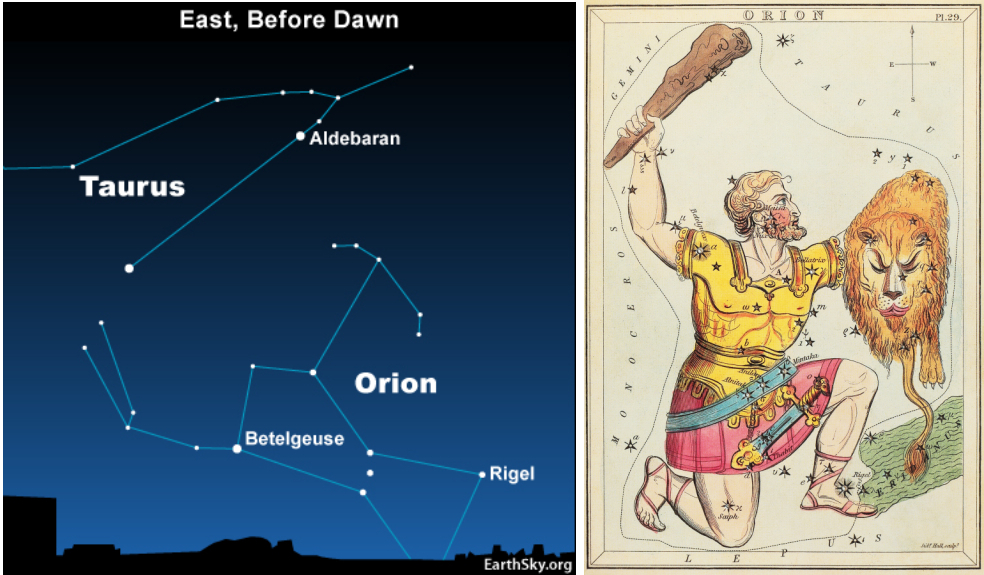 As the Gnostic Gospel of Philip supposedly say,

“Truth did not come into the world naked, but it came in types and images. The world will not receive truth in any other way. There is a rebirth and an image of rebirth. It is certainly necessary to be born again through the image.”

The subconscious adornment of images and symbols are what ‘constructs’ the Matrix of reality – they train our perception to create reality. The more I have delved into this phenomena, the more I have come to realise that the ‘perception deception’ does not end with Saturn and its minions (Moons). The eye, the Pyramids and the Orion constellation all come together in my painting below, tilted, The Creator Gods of the Fourth Dimension. When I painted it in the early 90’s I had no idea about all of the subjects I am highlighting here. 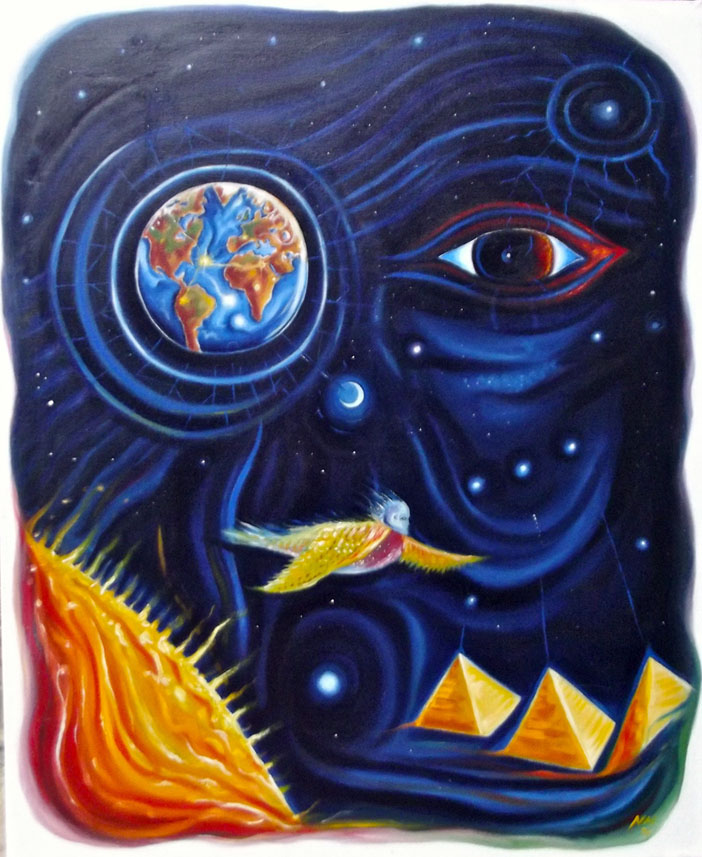 In part two I will delve a little deeper into these symbolic connections. Click here